Warning: Use of undefined constant DATABASE_SERVER - assumed 'DATABASE_SERVER' (this will throw an Error in a future version of PHP) in /nfs/c07/h03/mnt/173684/domains/uicdesign.com/html/info-aesthetics/2014-15/wp-config.php on line 28
 Secondary Research Assignment | Information Aesthetics

Thesis: Due to the newly changed Pedicab ordinances in Chicago, restrictions have been put in place to severely limit a pedicab operator’s livelihood with unreasonable requirements and penalties.

Data: A single infraction, as small as missing a wheel reflector, can be punishable by a $500 fine, vehicle impound and the revocation of the operator’s license for up to 5 years. 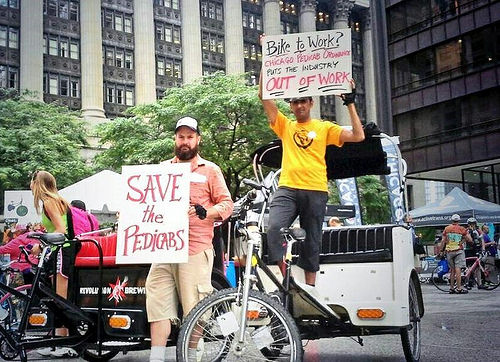 Thesis: With Chicago’s integrated network of video surveillance cameras in place, effectively every aspect of public life is documented, potentially posing a serious threat to the civil liberties of its residents.