Warning: Use of undefined constant DATABASE_SERVER - assumed 'DATABASE_SERVER' (this will throw an Error in a future version of PHP) in /nfs/c07/h03/mnt/173684/domains/uicdesign.com/html/info-aesthetics/2014-15/wp-config.php on line 28
 Danny Tirado | Information Aesthetics 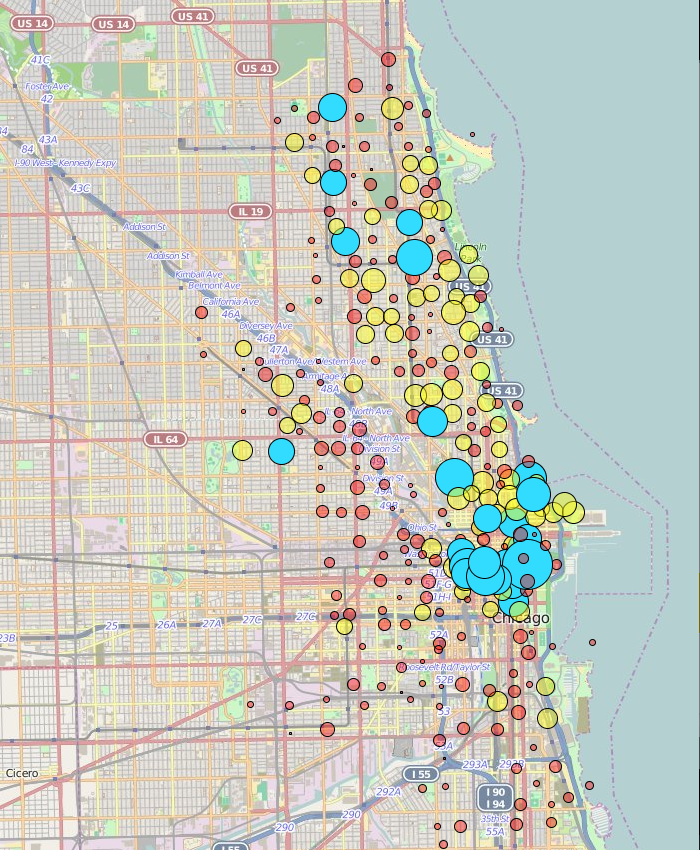 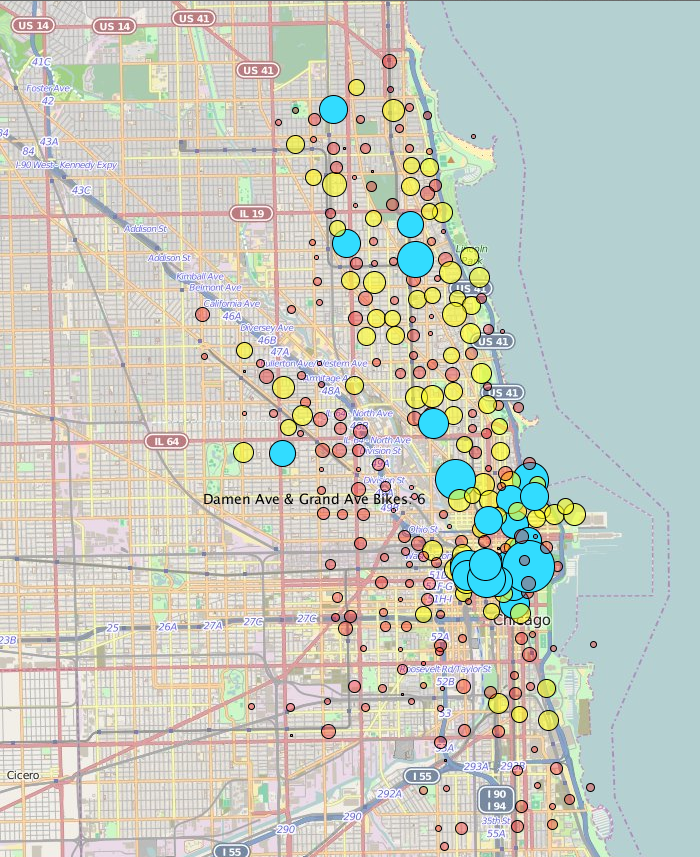 This is a small sample of data collected from the Divvy stations throughout the city. Each ride contains a list of the members trip ID#, station location, distance traveled from each station, and the duration of each trip. 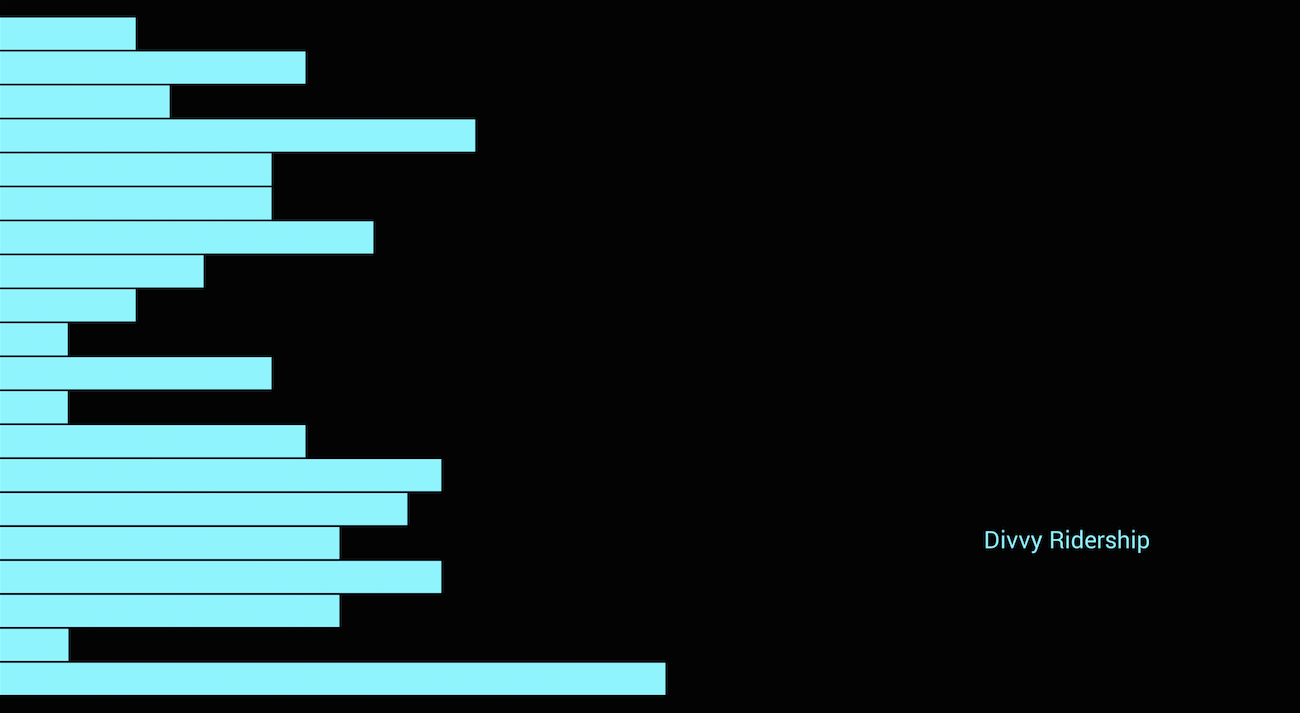 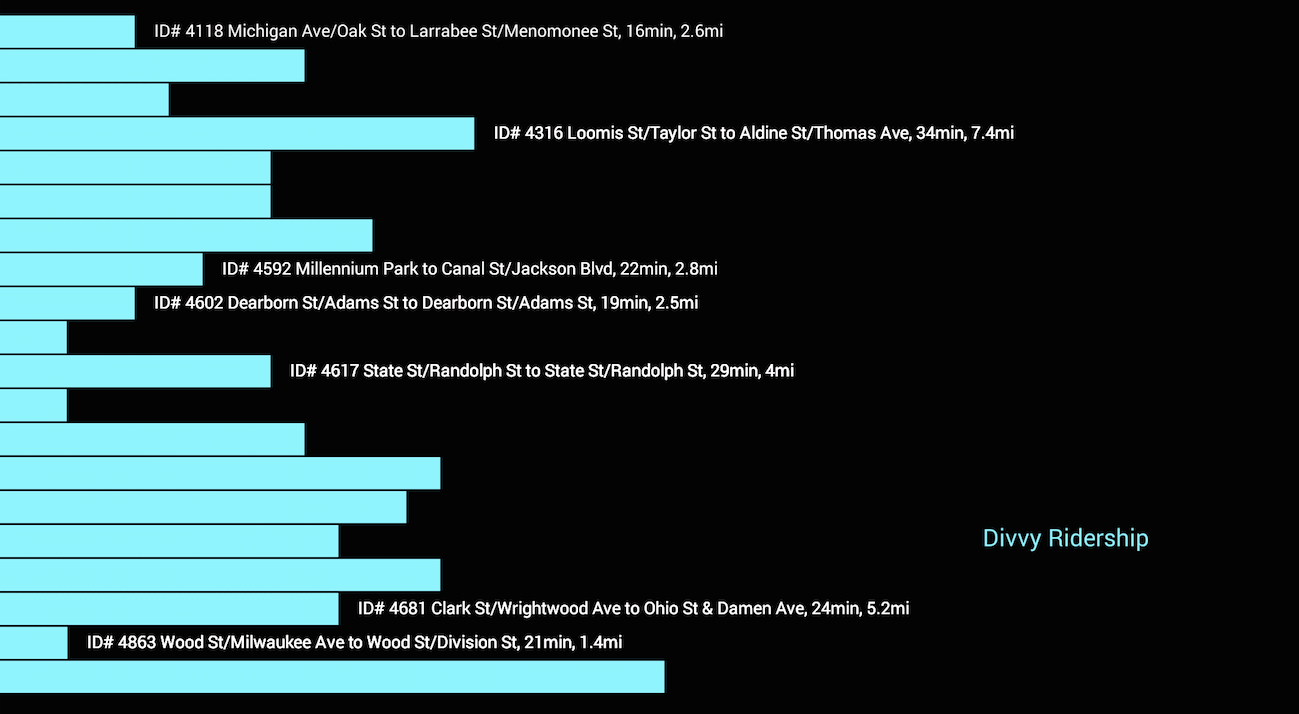 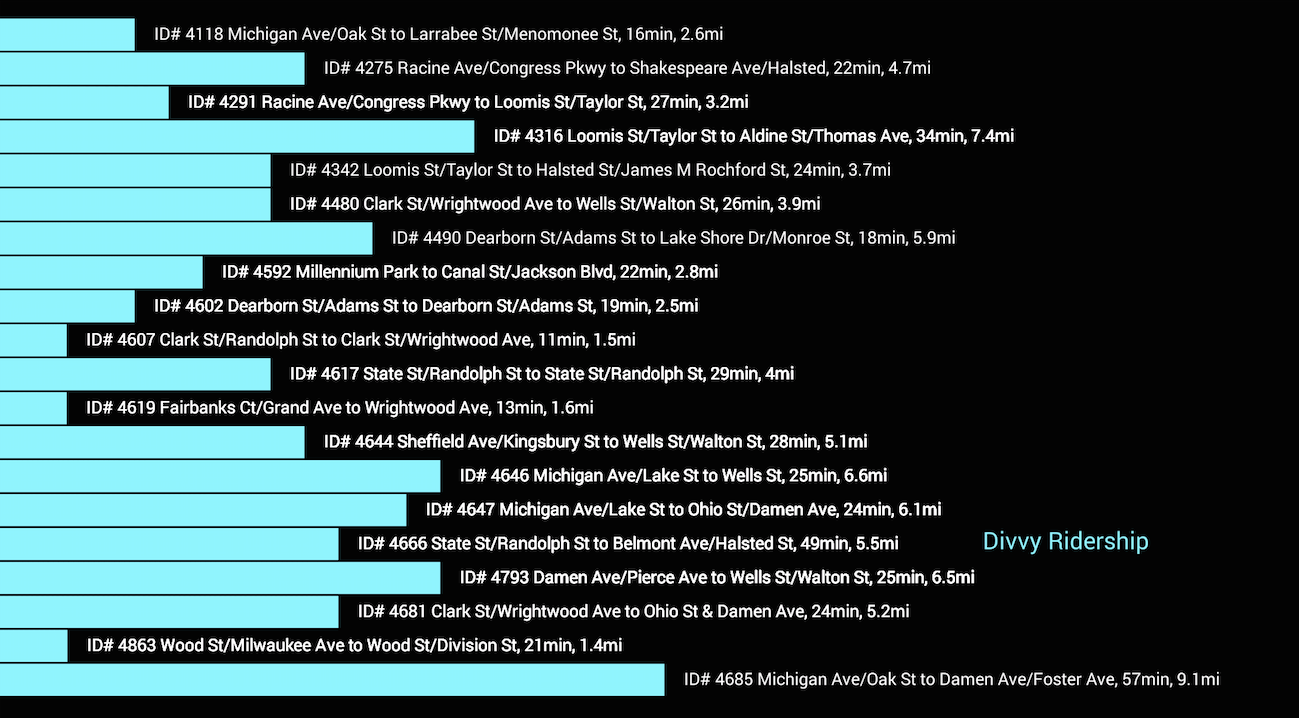 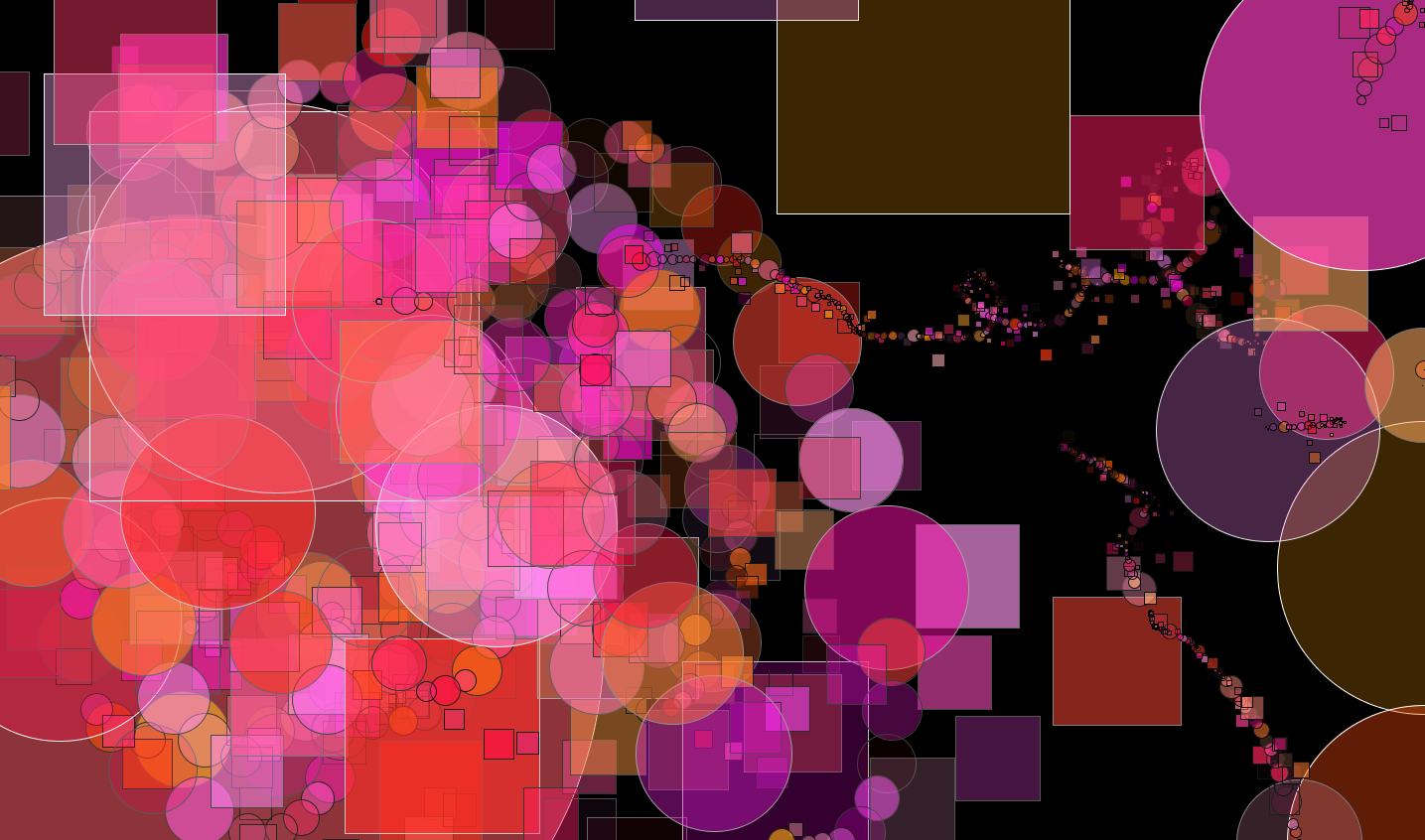 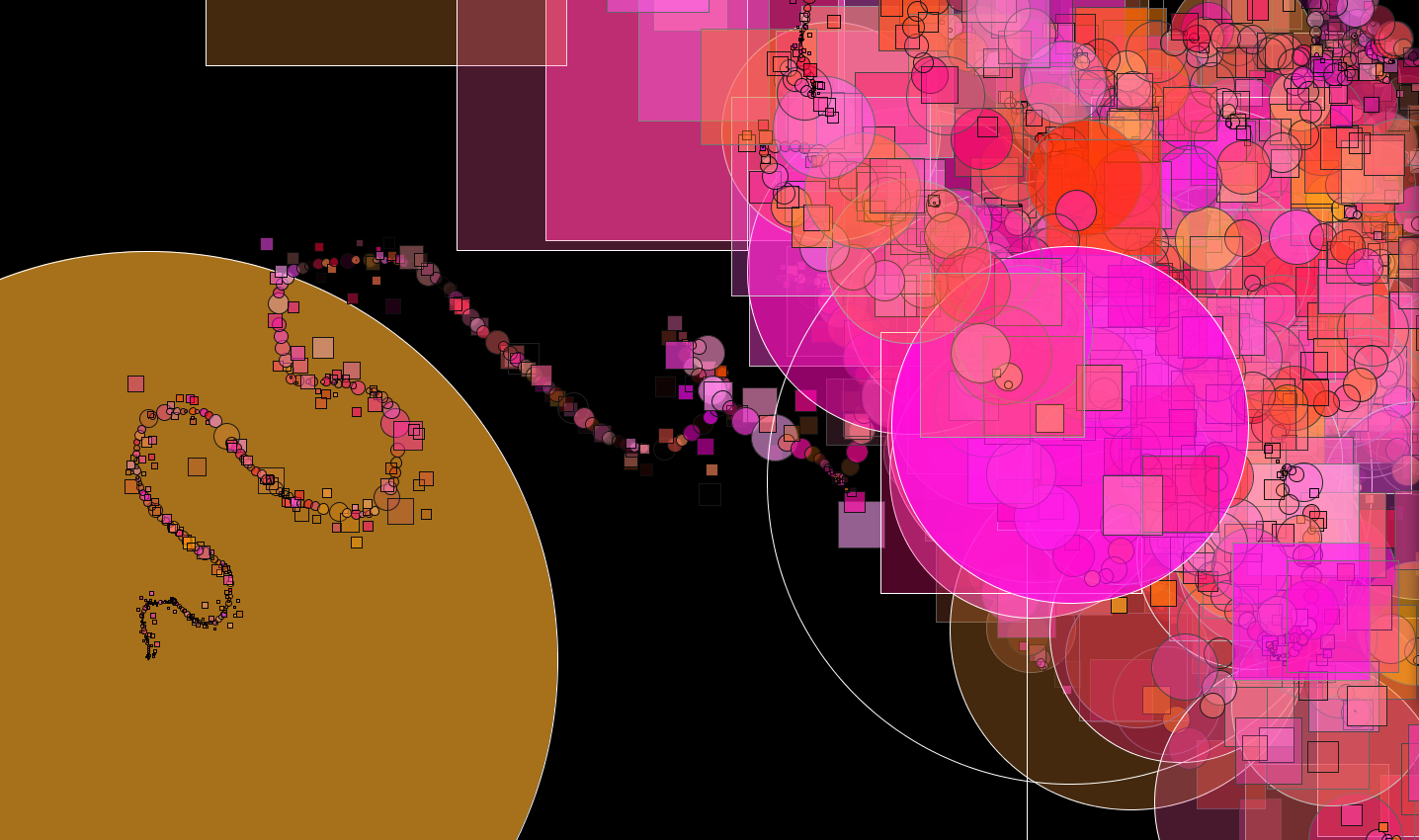 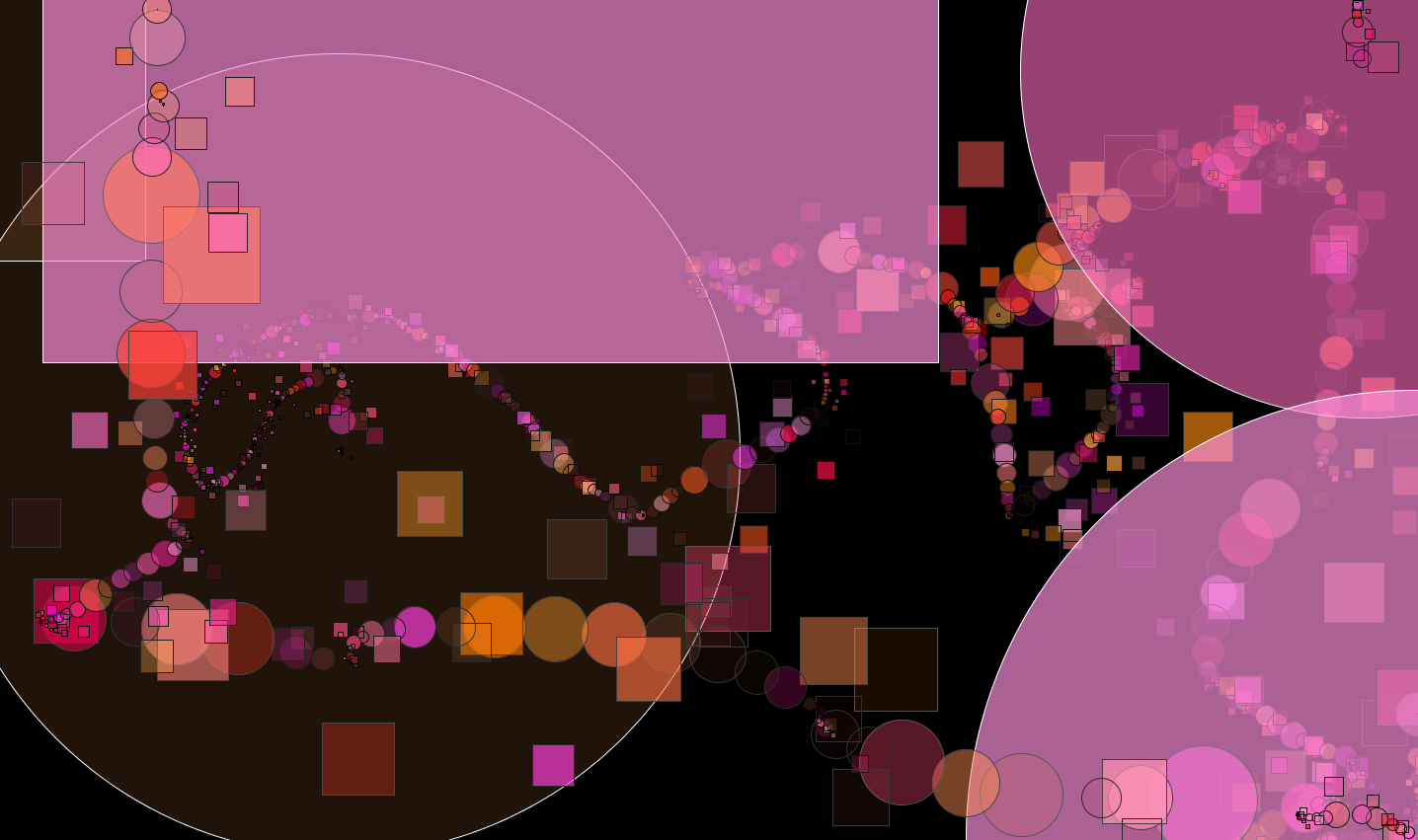 In the last decade, Chicago has majorly evolved as a bike friendly city . This may correspond to recent improvements in bike lane structures, or the newly implemented bike share program Divvy. Since 2000, the number of bicycle commuters has increased by 150 percent with an estimated 15,000 cyclists daily. However, growth in cycling has not come without challenges and tragedies. There has been an increased concerned about bicycle safety as motorists have been forced to share the road more and more. An average of 1,500 bicycle crashes are reported each year and that number has been rising. While crashes that result in major injuries or fatalities are reported, minor crashes are often not reported or recorded by the cyclist community. Although focused programs and efforts by the city to improve bicycle safety are underway, more can be done to highlight and reduce preventable hazards. By continuing to support and improve bike safety in Chicago, cyclists can be freer to enjoy the healthy, environmentally friendly trend of cycling in Chicago.

1)   To Law Enforcement: Can traffic camera footage be pulled up to investigate hit and run cycling accidents if a specific time frame and location is given? (What is the standard procedure for investigating hit and run incidents involving cyclists?)

2)   To Cyclists: How many times have you been hit or doored by a vehicle this year? Out of those incidents, how many have you officially reported. How many were serious injuries?

3)   Whom or what is responsible for crash incidents? Motorists? Cyclists? Road conditions? A combination?

4)   What current initiatives or plans are in place to help reduce the number of bike accidents around the city?

5)   What neighborhoods of Chicago or specific intersections have the heaviest rate of bicycle accidents, categorized by fatality or level of injury?

6)   What times of the day are accidents happening the most?

My tech research is a little old but it’s still a fascinating idea to me. Dead Drops is a project by Aram Bartholl and is featured throughout New York City in five different locations. At these locations, USB drives are embedded into brick walls, curbs and buildings functioning essentially as a data gloryhole. These Dead Drops allow for a completely anonymous, peer-to-peer, file-sharing network in a public space.

I personally, don’t think I’d hook my computer up to it however the concept of sharing information under the condition of anonymity is interesting. I do wonder how practical it might be to have the hardware sticking directly out of the mortar. Or what if someone were to drop some corrupt files onto it? This seems like it would be an intimate exchange based on trusting the files that are on the thumbdrive. 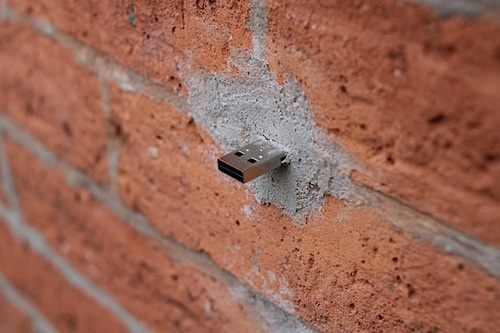 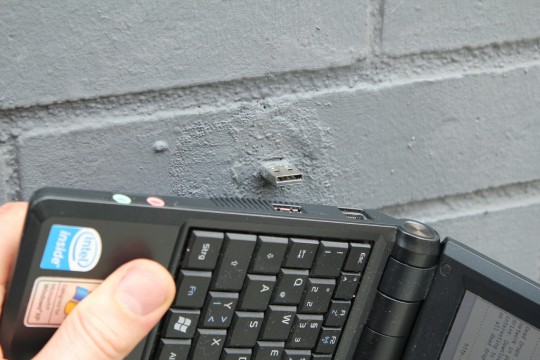 In Critical Visualization, Peter Hall outlines three approaches to data visualization and how they aid us in comprehending large amounts of data. The article identifies the value of visualization in three areas: as a technology, as a science, and as an art form. First, from a technological standpoint, data is gathered and can be used to develop new solutions that can be beneficial and effective. Secondly, the scientific view aims at reducing the complexity of the data and quantitative analysis. Lastly is the artistic approach to data visualization, which looks at style and display aesthetics to convey a narrative that, according to Hall, ‘stimulates the visual sensory system.’ In this respect, information visualization can help shape society by allowing the statistics to come to life and providing a narrative.

To me, data visualization is a particularly powerful tool for communication and it can display information in a concrete form for easier understanding. Furthermore, the process of data visualization seems to be an effective one by creating a favorable impression with the information presented. In order to be effective there needs to be a cross-fertilization of these three contexts of visualization in order for the data to be legible. The practice of making data accessible and legible with an emphasis on statistics, scientific plausibility and fact is what will ultimately effect viewers.

The project I’m citing is from Periscopic, a data visualization firm which focuses on promoting information transparency and public awareness. This visualization graphic shows how the lives of 11,419 people were cut short by gun violence in 2013. The graphic is based on data from the FBI’s crime reports and the (WHO). Arcs represent the victim’s life from birth to death, and also show how long he or she might have lived. If you hover over each arc with the mouse it reveals more information. You can also filter and compare categories on sex, ethnicity, gun type, region, age group and time of death. 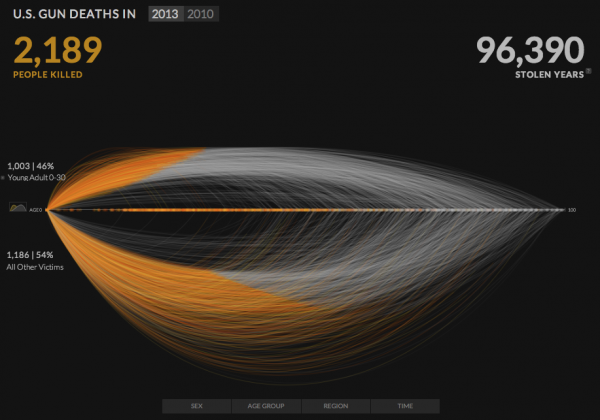 Thesis: Due to the newly changed Pedicab ordinances in Chicago, restrictions have been put in place to severely limit pedicab operators livelihoods with unreasonable requirements and penalties.

Data: A single infraction, as small as missing a wheel reflector, can be punishable by a $500 fine, vehicle impoundment and the revocation of operator’s license for up to 5 years.

Data: Alderman Tunney’s measure rules that operators would have to obtain a $250 annual license and a $25 decal. Pedicabs would have to be equipped with safety belts and meet other safety standards. Operators would need to carry liability insurance and post their fare structure on their vehicle, instead of negotiating the price before or after the ride.

Thesis: A committee meeting was held to discuss the proposed pedicab ban in Chicago with several testifying before the final city council vote to argue for less pedicab restrictions.

Data: Another sticking point is a rule that would cap at 200 the number of registered pedicabs allowed in a city that is estimated to have over 400 + operators.

Thesis: With Chicago’s integrated network of video surveillance cameras in place, effectively every aspect of public life is documented, posing a serious threat to the civil liberties of its residents.

Thesis: With an estimated 24,000 advanced surveillance cameras in place throughout Chicago, there are not too many places one can go without being constantly monitored, essentially destroying the expectation of privacy.

Data: 348 cameras were installed around the city, sold to the public on the claim that their purpose was to catch people speeding and running red lights. Now, 2/3 of those cameras are being upgraded with 360 degree swivels so they can rotate and monitor everything within sight of the intersection.

Thesis: Chicago is home to the most extensive and integrated camera network in the country.

Data: The new cameras will reportedly be paid for with a $650,000 federal grant from the department of homeland security, making us the most-watched citizens in the country.